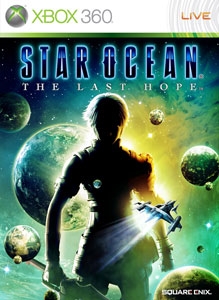 STAR OCEAN: The Last Hope is a prequel to the acclaimed sci-fi adventure series, STAR OCEAN, and is the franchise’s first entry on Xbox 360. Development studio tri-Ace Inc. delivers spectacular new visuals alongside exhilarating real-time battles with this highly anticipated prequel. STAR OCEAN: THE LAST HOPE is the first instalment in the series in which players will be able to control their own spaceship, moving from planet to planet as they explore the vastness of space. This unique experience also allows players to seamlessly switch between characters in-game and engage in team-oriented combat as they advance through the captivating storyline.