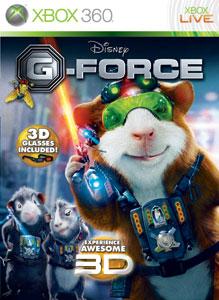 Based on the Jerry Bruckheimer 2009 summer movie blockbuster, G-Force is an exciting action video game that puts players in control of Darwin, the guinea pig leader of the covert intelligence G-Force squad, and housefly surveillance sidekick, Mooch. Team up with the other G-Force agents and use high-tech gadgets, awesome weapons, and pint-sized teamwork to save the world from an army of evil household appliances! Play G-Force on the Xbox 360® in fully optimized 3D! (2 pairs of custom 3D glasses included)