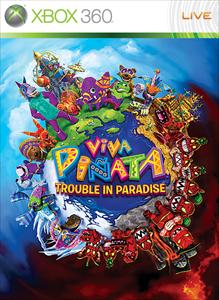 The Pinata Central database has been ruined by Professor Pester and his band of Ruffians. It’s your job to restore the data by collecting, customizing, &amp; caring for over 100 different piñata species in Viva Pinata: Trouble In Paradise. Professor Pester has plans of his own to slow this process down. New features include: 2 person coop on one console, and 4 person coop over Xbox Live. Ability to compete in mini-games with your Pinata against others on Xbox Live. Over 100 Piñata from various realms including the new Polar Pinarctic & Dessert Desert. Photo Mode ability to share your amazing garden with everyone online. Piñata Vision allowing you to invite new species to your garden with the flash of a card at your Xbox Live Vision Camera.