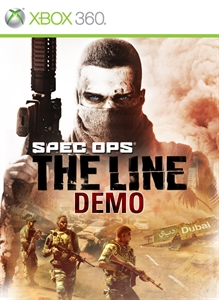 The demo begins with a Delta Force recon team, led by Captain Martin Walker, infiltrating Dubai six months after a cataclysmic sandstorm destroyed the city and left it buried in ruin. Chaos ensues as Delta is pulled into the middle of a civil war. Walker and his team must fight their way through the unpredictable war-torn city to find the man at the heart of its madness – Colonel John Konrad.