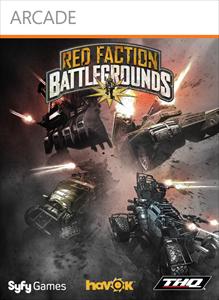 Blast, burn and blow away the competition in Red Faction: Battlegrounds with the new Origins DLC Pack! Destroy your enemies at high speeds in the new Race multiplayer mode. Hone your skills in new missions like Run and Gun, Riding Shotgun and Blast from the Past. And what would great DLC be without new vehicles like the Marauder Stomper and the Marauder Chomper, with new mounted guns to crush the competition. Just when you thought you’d killed everyone in every way on every map possible, now there are new vehicles, new arenas, new training missions and new achievements to allow you to creatively wreak havoc like never before!