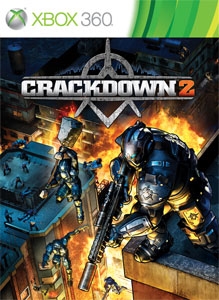 In Crackdown 2's first official gameplay trailer, Pacific City's new generation of Agents takes on its streets with obliterating force. In an explosive ballet of destruction, Agents work in tandem to bring down the Freaks and others who threaten Pacific City. Seasoned and returning Agents should be on the lookout for Orbs and other surprises, like the reveal of one of the Agents'  newest gadgets: the Wingsuit. Crackdown 2: sequel to 2007's action blockbuster, will redefine multiplayer action with its 4 player Co-op and support for up to 16 friends in Player-Versus-Player combat over an immense playground of vertigo-inducing verticality: Pacific City. Your Agent is back online. (Not Rated)