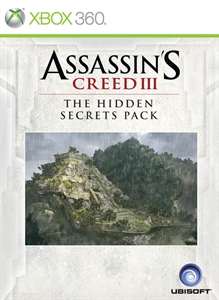 If you own the Assassin’s Creed®3 Season Pass, DO NOT purchase this content here as you will be charged again. Assassin’s Creed®3 game required; sold separately. Xbox LIVE free membership required. Some content may require an Xbox LIVE Gold membership to play (sold separately). Assassin’s Creed® III's Hidden Secrets Pack adds an extra 3 missions for an additional hour of gameplay, taking you from the Lost Mayan Ruins to the high seas. Each success is rewarded with an in-game weapon! You'll also receive 2 single-player skins including the original uniform of the Captain of the Aquila and the traditional Colonial Assassin; and 2 multiplayer characters including the fearsome Red Coat and the deadly Sharpshooter.