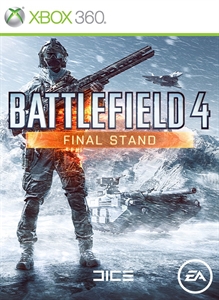 Final Stand is part of BF4 Premium Battlefield 4 Final Stand moves the fight into the grand Russian wintry landscape as the war closes in on its epic conclusion. In an effort to change the tide of the war a Pan Asian Coalition starts to take form and experimental prototype weapons enter the Battlefield. Take helm of a high-tech hover tank with versatile movement and capability to move sideways with strafing. Find the new powerful Battle Pickups: a devastating rail gun and a deadly high-speed drone. Master all the new high-tech additions to get the upper-hand when facing a whole new Battlefield with harsh blizzards rolling over the vast landscapes, get caught in tight infantry combat in top-secret military bases hidden in the mountains, or when leading your team to victory under a starry Siberian sky. Is this the final stand or the beginning of a long cold war?