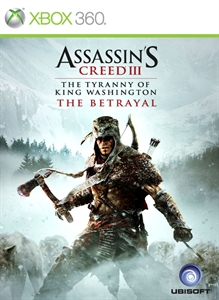 If you own the Assassin’s Creed®3 Season Pass, DO NOT purchase this content here as you will be charged again. Assassin’s Creed®3 game required; sold separately. Xbox LIVE free membership required. Some content may require an Xbox LIVE Gold membership to play (sold separately). The Betrayal is the 2nd episode in the Tyranny of King Washington, in which Washington goes mad with power and rules as tyrannical King. Connor awakes having never become an Assassin and accepts a new mission to fight for freedom. In this new episode, travel to Boston to find an unlikely but familiar ally in your war against the King – live history as it never happened and ignite a new revolution!